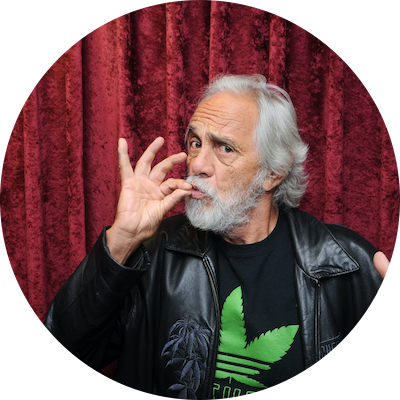 Thomas B. Kin Chong (born May 24, 1938) is a Canadian-American actor, comedian, musician, and activist. He is known for his marijuana-themed Cheech & Chong comedy albums and movies with Cheech Marin, as well as playing the character Leo on Fox's That '70s Show. He became a naturalized United States citizen in the late 1980s.

Thomas B. Kin Chong was born on May 24, 1938, in Edmonton, Alberta. His mother was of Scotch-Irish Canadian ancestry, and his father was a Chinese Canadian who immigrated in the 1930s. He has an older brother, Stan (1936-2019). After arriving in Canada, the senior Chong had first lived with an aunt in Vancouver.

As a youth, Tommy Chong moved with his family to Calgary, settling in a conservative neighborhood Chong has referred to as "Dog Patch". He has said that his father had "been wounded in World War II and there was a veterans' hospital in Calgary. He bought a $500 house in Dog Patch and raised his family on $50 a week." In an interview, Chong later described how he dropped out of Crescent Heights High School "when I was 16 but probably just before they were going to throw me out anyway." He played guitar to make money. "I discovered that music could get you laid, even if you were a scrawny, long-haired, geeky-looking guy like me."

The great Tommy Chong talks to John about loving house arrest, how he started as a musician working for Barry Gordy, knowing when he was going to marry his wife, being part of a comedy duo and an actor, his Mount Rushmore of smokers and how he’s “not rea...