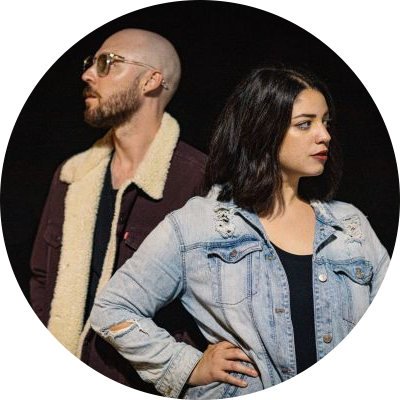 Rochester based indie-rock duo, Roses & Revolutions was called “spellbinding” by Atwood and “musical alchemists” by American Songwriter, Roses & Revolutions is comprised of longtime collaborators Alyssa Coco (vocals) and Matt Merritt (guitar), who played in various local bands until it became apparent that there was a special creative alchemy between the two. They gained traction with their hit single “The Pines,” leading to 11 million streams, a headlining tour, and syncs from virtually every network. Then, immediately after releasing their sophomore EP the world went into lockdown, effectively deflating any momentum surrounding the new music. But instead of wallowing for a year, Alyssa and Matt got to work, and what they found was a new way of making music, one without the pressure of immediate touring and promotion.

Hailing from Rochester NY, the Roses and Revolutions duo Alyssa Coco and Matt Merritt join us to talk about their incredible upcoming EP, Midnight Monsters, which is the latest of two they’ve released during the pandemic. We also talk horror movies, the ...