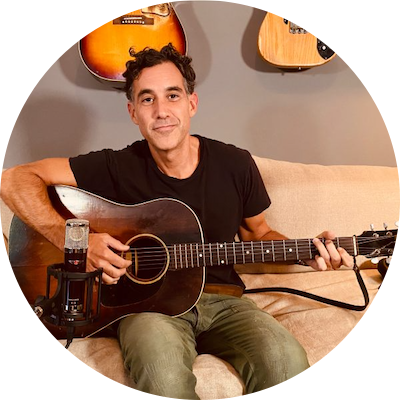 Joshua Radin (born June 14, 1974) is an American singer-songwriter. He has recorded nine studio albums, and his songs have been used in a number of films and TV series. His most successful album, Simple Times, was released in 2008.

Joshua Radin was born and raised in Shaker Heights, Ohio, United States, to a Jewish family of Polish, German, Austrian, and Russian background. He studied drawing and painting at Northwestern University, following his college years with stints as an art teacher, screenwriter, and art gallery employee.

Radin turned to music when he moved to New York City, his father bought him a guitar, and he taught himself to play and write music.

In 2004, American actor Zach Braff, a friend of Radin since their days at Northwestern, introduced Radin's first composition, "Winter", to Scrubs show creator Bill Lawrence, who ultimately used several of Radin's songs in various scenes of the television series.

Joshua Radin's new album "The Ghost and the Wall" dares us to be hopeful in a post pandemic world, and I have to say it works. The album was born out of the pandemic and getting to speak to Josh about his creative process over the past year and a half is...