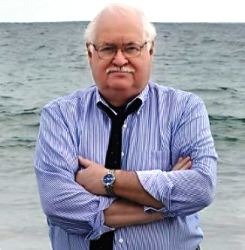 Carl Gottlieb (born March 18, 1938) is an American screenwriter, actor, comedian, and executive. He is best known for co-writing the screenplay for Jaws (1975) and its first two sequels, as well as directing the 1981 film Caveman.

Gottlieb was born to a middle class Jewish family[1] in New York City, the son of Elizabeth, a medical administrative assistant, and Sergius M. Gottlieb, an engineer.[2]

After studying drama at Syracuse University, he was drafted into the Army, serving as an entertainment specialist in the Special Services division from 1961 to 1963. Following his discharge, he became a member, later in the 1960s, of the San Francisco improvisational comedy troupe "The Committee". They made one feature film: A Session with the Committee.