Gary Kroeger came out of the gate running in this episode of Dystopia Tonight and we loved every minute of it! We talk progressive politics, democrats, republicans, and the rest of us caught in between, covid, his days on SNL, his passions growing up, wh...

Gary Kroeger came out of the gate running in this episode of Dystopia Tonight and we loved every minute of it! We talk progressive politics, democrats, republicans, and the rest of us caught in between, covid, his days on SNL, his passions growing up, what lead him directly into comedy and then eventually politics, splitting his time between Ohio and Chicago, some solid beard advice, and more, Enjoy! 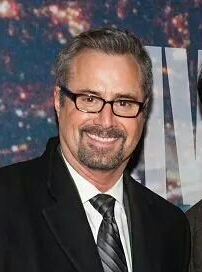 Gary Kroeger is an American businessman, columnist, and actor best known for his work as a cast member on Saturday Night Live from 1982 to 1985, and his work on various game shows. He ran in the Democratic Congressional primary in 2016 and then for an Iowa state house seat in the 2016 election.

Born in Cedar Falls, Iowa, Kroeger attended Northern University High School and graduated from Northwestern University in 1981. He joined the cast of Saturday Night Live during Lorne Michaels's hiatus from the show, under the direction of Dick Ebersol. During his tenure, Kroeger, who also wrote for the show, was frequently cast as young teenage kids and impersonated Walter Mondale when he was the Democratic candidate for US President in 1984. He is probably best remembered today for a Christmas sketch in which he and fellow cast member Julia Louis-Dreyfus perform "Blue Christmas" as Donny and Marie Osmond. The sketch culminates with the supposed brother and sister making out with each other.

Kroeger left the show in 1985 when Michaels returned to the show and the entire cast was replaced. Since then he has kept a fairly low profile, appearing in only a handful of movies, including roles as a producer in Christopher Guest's 1989 Hollywood send-up The Big Picture; as Reggie Mantle in 1990's Archie: To Riverdale and Back Again; and in the lead and title role in the spoof film A Man Called Sarge. Kroeger played a major role in the 1989 Murder She Wrote episode entitled "The Grand Old Lady" as a brainiac named, "Christopher 'Christy' McGinn" who ultimately solves the mystery.

He has enjoyed some success as a host of television game shows, most notably revivals of The Newlywed Game and Beat the Clock. He was also the announcer for the 2001 revival of Card Sharks and the 2002 revival of Press Your Luck called Whammy! The All-New Press Your Luck. He hosted a revival of the game show Beat the Clock in 2002 on PAX TV. In addition, he appeared on the sitcom Hidden Hills and as a weatherman in an episode of HBO's Curb Your Enthusiasm. From 1990 to 1991, he was host of Fox's Comic Strip Live.

Kroeger also made a guest appearance in the episode Columbo: Death Hits the Jackpot (1991), as the murder victim. In 2000, he hosted an infomercial for DirecTV, which played in-store at many Best Buy locations. In 2002, he hosted the 26th annual Mrs. America Pageant.