Steven Cropper, sometimes known as "The Colonel", is an American guitarist, songwriter and record producer. He is the guitarist of the Stax Records house band, Booker T. & the M.G.'s, which backed artists such as Otis Redding, Sam & Dave, Carla Thomas, R...

Steven Cropper, sometimes known as "The Colonel", is an American guitarist, songwriter and record producer. He is the guitarist of the Stax Records house band, Booker T. & the M.G.'s, which backed artists such as Otis Redding, Sam & Dave, Carla Thomas, Rufus Thomas and Johnnie Taylor.

His new album is a triumph during the age of lock downs, because the entire thing was done on an iPhone and you wouldn’t be able to tell the difference if you tried. We talk about that, extensive life and career, some name drops, road stories, his writing process and his love for music above all else. Enjoy!

His new album can be found here: https://www.amazon.com/Fire-Up-Steve-Cropper/dp/B08TYSB8PK 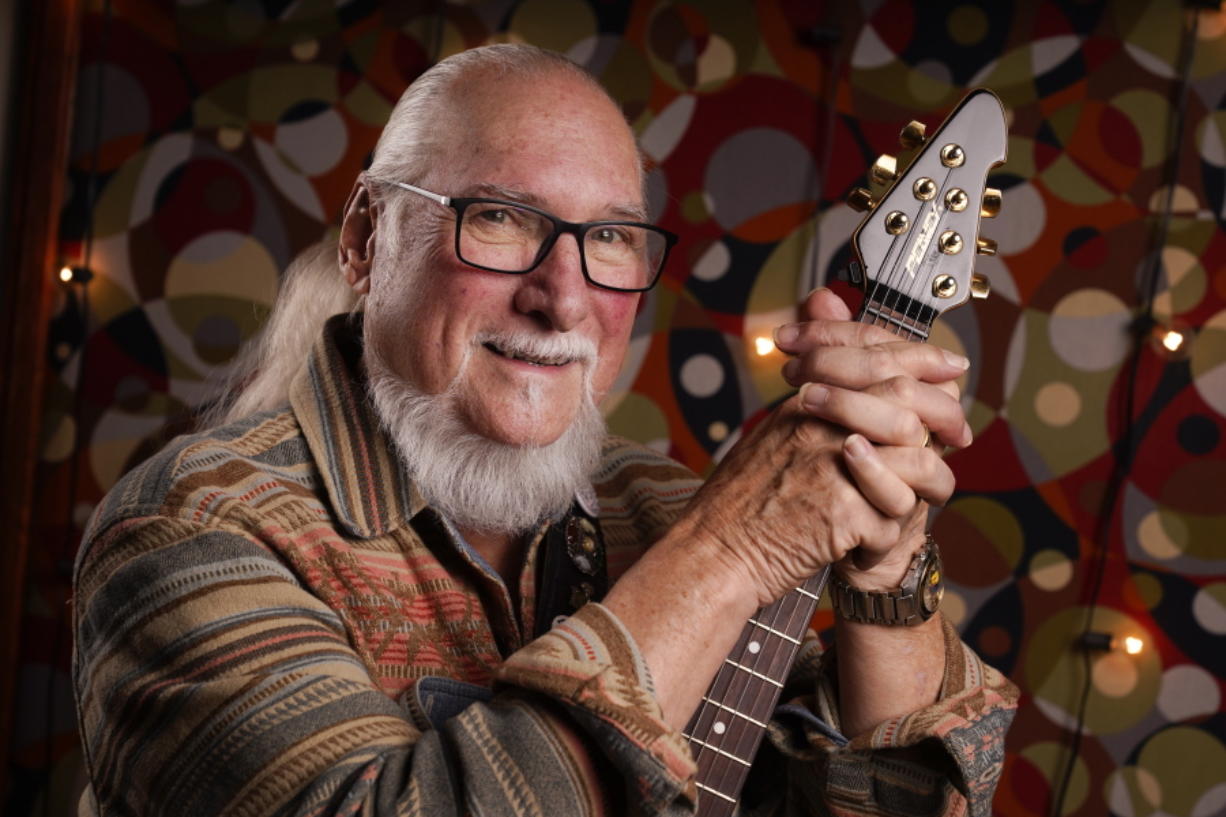 If Yankee Stadium is “the house that Babe Ruth built,” Stax Records is “the house that Booker T, and the MG’s built.” Integral to that potent combination is MG rhythm guitarist extraordinaire Steve Cropper. As a guitarist, A & R man, engineer, producer, songwriting partner of Otis Redding, Eddie Floyd and a dozen others and founding member of both Booker T. and the MG’s and The Mar-Keys, Cropper was literally involved in virtually every record issued by Stax from the fall of 1961 through year end 1970.Such credits assure Cropper of an honored place in the soul music hall of fame. As co-writer of (Sittin’ On) The Dock Of The Bay, Knock On Wood and In The Midnight Hour, Cropper is in line for immortality.

Born on October 21, 1941 on a farm near Dora, Missouri, Steve Cropper moved with his family to Memphis at the age of nine. In Missouri he had been exposed to a wealth of country music and little else. In his adopted home, his thirsty ears amply drank of the fountain of Gospel, R & B and nascent Rock and Roll that thundered over the airwaves of both black and white Memphis radio. Bit by the music bug, Cropper acquired his first mail order guitar at the age of 14. Personal guitar heroes included Tal Farlow, Chuck Berry, Jimmy Reed, Chet Atkins, Lowman Pauling of the Five Royales and Billy Butler of the Bill Doggett band.

The aspiring musician quickly became buddies with another guitar playing teenager named Charlie Freeman and together the two schoolmates formed a band they dubbed the Royal Spades. A hybrid version of the Spades, renamed The Mar-Keys, wrote and recorded a popping instrumental entitled Last Night in early summer 1961. Released on Satellite Records, the record shot into the Top 5 on both the pop and R & B charts, When a California company also called Satellite Records threatened to sue over use of the name, the Memphis-based Satellite metamorphosized into Stax.

By the time of the Mar-Keys record, Cropper was something of a studio veteran, already having played sessions for Sun, Duke-Peacock and Hi Records. It was only natural, then. that shortly after quitting the Mar-Keys during their first tour, Cropper was given the keys to the Stax studio and became, along with company co-owner Jim Stewart, the label’s de facto A& R man and engineer.

For the next decade Cropper’s career was wed to Stax. Booker T. & the MG’s were born when Cropper, keyboardist Booker T. Jones, drummer Al Jackson and bassist Lewie Steinberg were hired for a session in late summer 1962 at the then-fledgling Stax Records. When the rockabilly singer the quartet was ostensibly hired to accompany finished early, the four musicians whiled away their time jamming on a blues. Unbeknownst to any of them, Stax co-owner and erstwhile engineer Jim Stewart turned on a tape deck. Satisfied with the results, the four newly constituted band members worked up a second side which came to be known as Green Onions. A dynasty had begun. In 1964 Steinberg left the band and was replaced by Cropper’s high-school friend Donald “Duck” Dunn.

Booker T. Jones gradually eased his way away from Stax at the turn of the decade. When Cropper, Dunn and Jackson did not follow suit, the MG’s ceased to be an active unit. Cropper himself left the label in the fall of 1970 to start up, with Jerry Williams and former Mar- Key Ronnie Stoots, the Trans-Maximus (TMI) recording studio and record company. In the first half of the 1970s, Cropper produced and played on sessions recorded at TMI or Ardent by the likes of Poco, Jeff Beck, Jose Feliciano, Yvonne Elliman, John Prine, Dreams and Tower Of Power. Later production successes included Tower of Power’s 1978 LP We Came To Play and John Cougar’s 1980 release Nothing Matters And What If It Did.

In 1977, with Stax alumni Willie Hall filling in for the late Al Jackson, the MG’s briefly reunited to record the Universal Language LP for Asylum. Shortly thereafter Cropper and Dunn joined Levon Helm’s RCO All-Stars and then received a call from John Belushi and Dan Aykroyd which resulted in the formation of the Blues Brothers Band. The original incarnation of the Blues Brothers recorded three albums, including the number one Briefcase Full of Blues, and made a hilarious eponymously-titled feature film.

When the Blues Brothers ceased active duty after the passing of Belushi in the spring of 1982, Cropper continued to be in constant demand as both a producer and session guitarist. He also found time to resume his solo career, recording two albums for MCA in 1980 ( Playin’ My Thang) and 1982 ( Night After Night). His first solo album, With a Little Help From My Friends, had been recorded for Stax back in 1969.

In 1997, Steve Cropper and Booker T. and the MG’s career was enshrined in print in Rob Bowman’s, Soulsville U.S.A. : The Story of Stax Records (Schirmer Books). In spring 1998 Fantasy Records issued a three-CD Booker T. and The MG’s box set.

During the whole period of the MG’s glorious renaissance, Cropper has also been busy fulfilling his commitments to The Blues Brothers Band, who have issued two recent CD’s: Live In Montreaux, on WEA International in 1990, and Live From Chicago’s House Of Blues, on the House Of Blues label in 1997.

With John Goodman taking the place of the late John Belushi, The Blues Brothers’ second feature film, Blues Brothers 2000, was released in February 1998.

Cropper also continues to be an in-demand musician and producer. His string-bending talents being most recently showcased on the latest Paul Simon, Ringo Starr, Buddy Guy (Heavy Love) and Johnny Lang (Wander This World) albums. He also contributed his talents to efforts from Elton John and Steppenwolf.

In the producer’s chair, he has most recently piloted Joe Louis Walker’s last three albums: 1995’s The Blues Of The Month Club, 1997’s Great Guitars and Preacher And The President (Verve).

In addition to his commitments to the MG’s and The Blues Brothers, Steve Cropper has started his own label (Play It, Steve! Records), whose inaugural release, entitled Play It, Steve!, was released in February 1998.

Nudge It Up A Notch, featuring Steve Cropper and Felix Cavaliere, was released July 29, 2008, on Stax. It’s such an interesting collaboration that even the record label is synonymous with great R&B. Renowned guitarist and R&B legend Steve Cropper (Booker T & the MGs, the Blues Brothers, Otis Redding, Wilson Pickett, Sam and Dave) and vocal/keyboard legendFelix Cavaliere (leader of The Rascals) convened to create an album of incredible proportions.

Then, in 2010, Cropper and vocalist/keyboardist Felix Cavaliere reconvened for their second collaborative recording. Sparks flew at the crossroads of Memphis soul and East Coast R&B when Stax Records released Midnight Flyer.

RStone100Perhaps the ultimate testament to Steve Cropper’s immense contribution to popular music over the last four decades was his ranking by England’s Mojo Magazine in 1996 as the number two guitarist of all-time (Jimi Hendrix was number one). And in 2003, Rolling Stone magazine readers voted him among the Top 100 Guitar Players of all-time.

As impressive as that is, Steve Cropper’s legacy as a solo artist, member of Booker T. and the MG’s and the Blues Brothers, session musician and producer is far from complete. Steve also owns a state-of-the-art recording studio in Nashville called Insomnia Studio. Here’s looking forward to the next few decades.