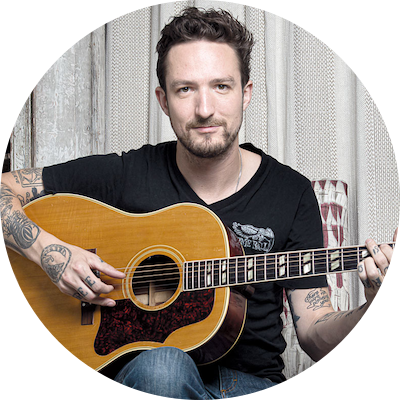 Francis Edward Turner (born 28 December 1981) is an English punk and folk singer-songwriter from Meonstoke, Hampshire. He began his career as the vocalist of post-hardcore band Million Dead, then embarked upon a primarily acoustic-based solo career following the band's split in 2005. In the studio and during live performances, Turner is accompanied by his backing band, The Sleeping Souls, which consists of Ben Lloyd (guitar, mandolin), Tarrant Anderson (bass), Matt Nasir (piano, mandolin) and Callum Green (drums).

To date, Turner has released nine solo albums, four rarities compilation albums, one retrospective "best of" album, one split album and five EPs. Turner's ninth and most recent studio album, FTHC was released on 11 February 2022 and reached number 1 in the UK albums chart in the week following its release.

Frank Turner was born in Bahrain, to Jane Cartwright, a primary school head teacher, and Miranda Turner, an investment banker, who came out as a trans woman in 2015. Upon returning to England, the family settled first in Winchester before moving to Meonstoke. Turner was educated at Summer Fields[citation needed] and subsequently on a scholarship at Eton College, where he studied alongside Prince William. He attended the London School of Economics where he read History.

His maternal grandfather is Richard Fox Cartwright (1913–2009), Bishop of Plymouth. Through Miranda, his grandparents are Sir (Ronald) Mark (Cunliffe) Turner (1906–1980), a merchant banker who was also the chairman of high street retailer BHS, and Margaret, daughter of Sir Hereward Wake, 13th Baronet.

Frank Turner Returns to Dystopia Tonight to talk his 50 state tour, the struggles of coming out of covid, we have some fun with Skymall, Frank gives us his thoughts on the Star Wars Franchise, IHOP, Waffle House and Stranger Things. We also talk about hi...