Melanie Chartoff first became famous for her comedy work on the ABC series Fridays, and in the 1990s Fox sitcom Parker Lewis Can't Lose. She voiced both Didi Pickles and Grandma Minka, Didi's mother on the Nickelodeon animated series Rugrats and All Grow...

Melanie Chartoff first became famous for her comedy work on the ABC series Fridays, and in the 1990s Fox sitcom Parker Lewis Can't Lose. She voiced both Didi Pickles and Grandma Minka, Didi's mother on the Nickelodeon animated series Rugrats and All Grown Up!

She was a blast to have on Dystopia Tonight as we talked her early career, awkward hair dates, Larry David, stand-up comedy, acting, voiceover work, her family life, becoming an author. Looking for a defining role, her new book and more! Enjoy! 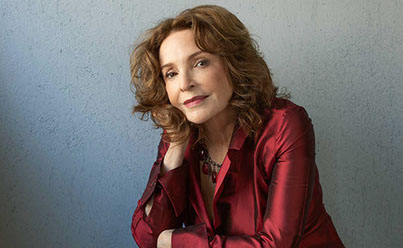 Melanie Chartoff’s career as an actress and singer began early, onstage, with “Three Penny Opera” for Yale University, and the New London Opera Company, and in the children’s company at Long Wharf Theatre in her home town, New Haven, Connecticut. She backed up the Ronettes and the Crystals as a wholesome go go girl for Phil Spector, and backed up those experiences with a degree in Theater Arts and TV Directing from Adelphi University, and Hofstra, N.Y.

A student of the legendary Stella Adler, Chartoff soon appeared on Broadway in Galt MacDermott’s “Via Galactica,” and “Scapino,” with England’s Young Vic Company. She studied lyricism with Lehman Engle at BMI’s Musical Theater Workshop. Off-Broadway, she sang in Sondheim and Rodgers’ “Do I Hear a Waltz?” and was featured in the improv musical revue, “The Proposition.” She was a singing ingénue stand-up, goofing on glamour at the Improv Clubs of NY and LA. West Coast Premieres of “Sunday in the Park with George,” “March of the Falsettos,” “Big River,” and “Beyond Therapy” followed in Los Angeles.

When television called, she starred and wrote for ABC’s late night comedy show, Fridays, alongside Larry David and Michael Richards. She had starring and recurring roles on the Newhart Show, Married with Children, Seinfeld, Wise Guy, Allie McBeal, Parker Lewis Can’t Lose, and the animated Jumanji. She co-hosted the syndicated What’s Hot What’s Not with Fred Willard, and Dick Clark’s special Where Are They Now?

Chartoff’s voice is recognizable for more than singing. She shares an Emmy and a Star on the Hollywood Walk of Fame for voicing the iconic characters Didi and Minka in the animated series Rugrats, which still streams around the world.

She’s been a popular guest on talk shows, including Tonight Show with Johnny Carson, Merv Griffin Show Entertainment Tonight, and Good Morning programs in NY, LA, Chicago, etc. Most fans are surprised to learn that Chartoff is also an environmental inventor. During the last LA drought, she patented a recycling device, the Grayway Rotating Drain™, that directs used, filtered shower water to irrigate gardens and flush toilets.

She’s also the creator and director of Charismatizing℠ Improvising seminars, her popular workshops which empower clients to have a stronger presence when needed in both private and professional realms. She has given talks at UCLA Andersen Business School and Chapman University on Charismatic Communication.

Melanie writes for Jewlarious, One the Table, The Huffington Post, The Jewish Journal, The Funny Times, Defenestration Magazine and performs her pieces as spoken word events for Comedy Central, Jewish Women’s Theater, and Tasty Words, LA.

In addition to the Emmy, Chartoff shares a Dramalogue Award for “March of the Falsettos.” She is a voting member of the Television Academy, the Screen Actors Guild, and belongs to the American Federation of Television and Radio Artists, PEN, Women in Film, Jewish Women's Theatre, Theatre 40, and Actors Equity Association.

Recognition for her charity work includes a Mayor's Certificate of Appreciation, Los Angeles Certificate of Appreciation, and Citations from the City of Hope for creating and co-producing “Halloween for Hope” –“taking the scariness out of Halloween for kids with cancer and the people who love them.” She mentors two Oaxacan sisters, graduates of high school and college, through the M.O.S.T.E. program. She has also performed her one-woman musical memoir to benefit breast cancer research, at-risk theaters, and children’s charities.

Chartoff is a recent first time newlywed/stepmom, with a prefab family of brothers-in-law, son-in-law and two terrific kids in their twenties.

Recent projects include the role of Mary Pickford onstage in "The Consul, the Tramp, and America's Sweetheart" at Theatre 40, the role of Maureen in the YouTube RED feature "Alexander I.R.L;" she currently recurs as Miss Charisma on the Cartoon Network hit "OK, KO;" is directing and starring in her original screenplay "Vivian's Voice" with Jenny O'Hara and David Proval.

For more information on Melanie go to Wikipedia; for more Film and TV clips go to YouTube; to request directing or coaching services live or via SKYPE, go to charismatizing.com.